Have you heard of Geocaching?
Geocaching is a world wide game where people hide boxes, or caches, as they are called, and then put out coordinates so other people can find them. Then people log their visit on a piece of paper. It is like a treasure hunt, only the treasure is see new places and get new experiences. In the little boxes people sometimes leave small items, some you can just trade (you have to put something in to take something out), and some items are trackable. My dad has a trackable has travelled from Sweden to Mauritius to Svalbard and currently is in the states!

My dad has done it for some years sporadically, however I have just not felt the urge to get involved. This changed this summer. Mostly because my boyfriend is playing a game called ingress where you ”take over” virtual bases out in the real world. So we are always stoping in weird places, and I also wanted to have something to do.
So said and done I installed the app and on a little over-day trip out to a castle I found one I thought might be cool. Me and two friends hiked our way towards the coordinate and after some searching we found a cave! I mean a real cave going in under the castle. ”The cache must be in there!” we said, but it was a stream leading out from the cave and none of us had wellies, so I started to climb, one foot on either wall towards the cache, and found it! It was so Indiana Jones and so cool! I was hooked!

I wanted to send out some of my own trackable items, but I wanted to do something fun. and then it occurred to me the, what if the mane six was out to travel the world? They have all 6 different personas, and would want to see different places.

So I have found 4 of the 6 ponies, which I am starting to send of into the world. I will just have to find suitable first places for them…

Twilight Sparkle: wants to see historical and cultural places, as she loves history.
Applejack: wants to see the country side, and hopefully some apples
Rainbow Dash: wants to see daring places, the dangerous and cool, the better
Pinkie pie: Wants fun places!
Rarity: wants to see the big fashion cities!
Fluttershy: wants calm and quite places and animals 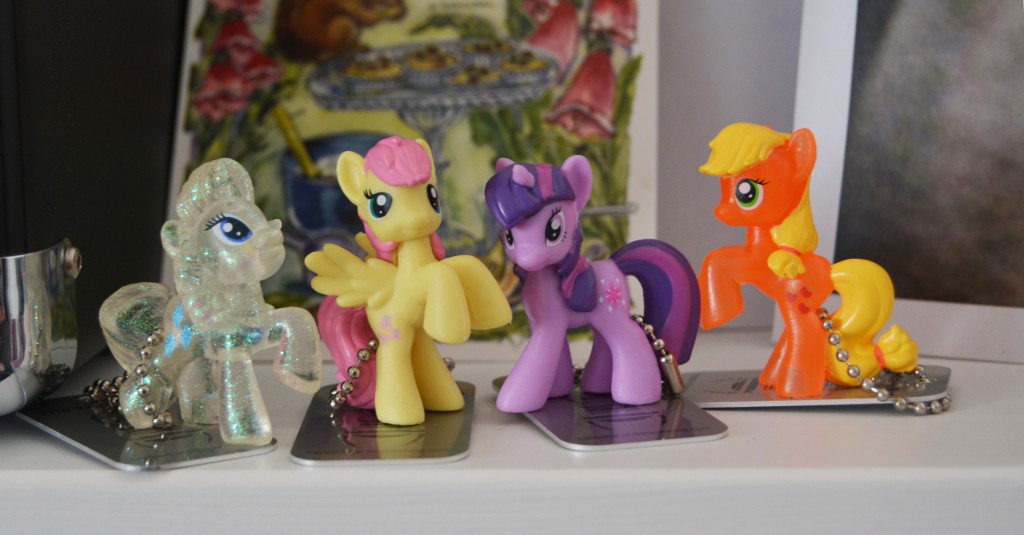